So much has happened since I wrote my last blog that I am not quite sure where to begin. I have been working now for about a month in both the Centro Comunitario Nueva Esperanza (Community Center of New Hope) and the Centro de Atención Para Migrantes en Exodus (Attention Center for Migrants in Exodus- CAME). My job at the community center is to teach English and geography to students ages 6-12 who are behind in school. They come to the community center after school to continue to learn in a safe environment that challenges children to grow academically, socially and spiritually. I am also helping to replicate this learning environment in CAME by teaching English, geography and mathematics to children between the ages of 3 and 18. This facility is a shelter for families that are waiting their turn to enter into the United States in order to seek asylum, because their home country is not safe for various reasons. In both of my work places I am supported by so many staff members that love their work and care for people whole-heartedly and without reservation.
Everyday I am amazed by the hope that is so prevalent in the midst of difficult circumstances. I am greeted every morning by so many little welcoming arms that wrap around me accompanied by joyful shouts of, “Maestra! Maestra! Que vamos hacer hoy?” (Teacher! Teacher! What are we going to do today?). I've been reminded what a privilege it is to learn and I feel so honored to share the gift of knowledge with these young ones who hunger to know more about the world we all live in. I’ve learned that it is about more than just English, geography, and mathematics. Vocab, maps and numbers are important, but more importantly I get to bring life to children’s everyday experiences. I can use English vocabulary such as “today I am angry, happy, or excited” to help them realize that we do not always feel one way or another and that it is important to be aware of how you feel right now versus how you felt an hour ago. Or, I can talk about the culture of Agua Prieta in a way that helps the children understand that Agua Prieta was not always this way- certain parts of the culture are the same but many things have changed and will continue to change with time. I have learned a lot about what it means to hold a child’s attention for an extended period of time and what I must do to make learning a valuable experience for us all.
I never knew I would be teaching English to young children in a classroom setting, and I definitely did not know I would ever teach geography entirely in Spanish...but I would not trade this experience for anything else. I have already learned so much! Everyday my Spanish is improving, my relationships with the children and my coworkers grow stronger, and I become more and more confident in my job. It never gets easier to say goodbye to the children who will continue their journey into the US after a two or three weeks waiting in CAME, and it never gets easier to tell a child for the six-hundredth time to sit down and keep his hands to himself. But it's all worth the smiles on those innocent faces and the twinkle in those curious eyes when they learn something for the first time or understand something they’ve never understood before.
So I'd like to say thank you to all the teachers who stick it out even when you’re at wits end and your patience is running thin. I’ve only been teaching for a month, but it is surely one of the most rewarding experiences I’ve ever had. And I’d like to say thank you to all those who search for hope in the midst of despair and joy in the midst of heartbreak. Love truly does conquer all, and to love one another makes the world a much better place.

I have spent the past four weeks at four different orientations in four geographically and culturally distinct places. My first week was spent in Akron, PA then I travelled to Mexico City to meet the MCC Mexico staff before heading to a third orientation in Tuscon, Arizona to meet my Agua Prieta roommate and the other Young Adult Volunteers that would be working in Tuscon. Finally, Hannah and I arrived in Agua Prieta for my fourth and final orientation to get to know the ministries and staff here.
This month has been nothing short of overwhelming! But, not the bad kind of overwhelming. Just the kind of overwhelming you would expect to feel when living out of a suitcase, travelling long distances, learning to think in a secon language and meeting completely different groups of people week after week. I really have enjoyed every step of the way. Each place I've been, I've met people that could relate to the journey I was about to take in specific ways. I met people that I knew would continue to support me throughout the year and that I could offer support to in return. It was a whirlwind, but amidst it all, I was able to see joy, love and peace.
In Pennsylvania I learned how to play the "Mennonite game" in which everyone's sister's cousin's uncle went to school with his mom's best-friend's daughter. Here I made friends that would be going through my same situations in various corners of the Earth. In Mexico City I found creative ways to communicate sarcasm through facial expression and jokes through charades and strange dance moves. Here I met the people that I am confident will have my back in any and all circumstances. In Tuscon I learned that it is very important to stay hydrated when attempting to bike in 100+ degree weather. Here I met friends I never knew I would have and a group of strong, supportive women just north of where I would be living. And in Agua Prieta, so far, I have learned that communication across the language barrier is something that should be taken lightly- I've been learning to laugh at my mistakes. Here I am surrounded by so many people that radiate love for others and for God throughout their daily events and responsibilities.
Most of all, this week taught me that people truly are wonderful when they chose to live and breathe love, peace and joy. Not to say that the people I encountered were perfect, but just that I am so happy to be walking and living amongst people that love God and love others without borders- whether it be borders of language, culture, or physical borders...love, joy and peace cross borders and I am grateful for that.

Posted by Katelyn Rediger at 5:08 PM No comments:

Well, I have officially packed my bags and started on my way. In typical, stubborn, "Katelyn fashion", once I decided I was only going to bring one suitcase, that was the way I was determined for it to be. So, I packed the items that simply could not be left behind into the remaining cracks and crevices of my guitar case and headed on my way- all luggage bursting at the seams. Leaving was a challenge- having just met my first nephew three days prior and finally having all six of my siblings in one place for the first time in forever, I had to say goodbye. As adventurous as I like to say that I am, it's not easy to leave a place that is comfortable and familiar for one that is foreign and new. I had gotten back into the swing of my jobs at home, did't quite have the time to accomplish all of the summer goals I had set for myself, and felt like I could've stayed and caught up with close family and friends for much longer.
I reluctantly woke up at 3:30 am on August 14th after only three short hours of sleep to begin my travel to Philadelphia International Airport. By 4:30pm, I was on my way to MCC headquarters in Akron, PA with three other travelled, tired, SALTers. We reached Akron and ate a highly anticipated meal...now it was time to meet the other 60-something participants in MCC's 2019 International Volunteer Exchange Program (IVEP) and Serving and Learning Together (SALT) program. I walked in to a giant game of Dutch Blitz. People were heading from their team's corner to the middle with giant laminated cards, trying to outrun their opponent that was attempting to play the same card. If you've played this fast-paced, competitive game before, you know what I'm talking about and can understand why a version of this game with 20"x25" cards would only increase the chaos.
And here my story begins. From the outset, I was not looking forward to going to orientation. I knew that God had called me to serve with MCC in Mexico, but I did not feel prepared. I did not care to meet new people, have a stranger for a roommate, share meals with awkward silence or explain who I was over and over again. All the worry and complaining left no space for me to consider that everyone here might be feeling the same way about this new adventure that we would all be embarking on together. As time went on and I met more and more friendly faces, I realized what a comfort it was to be surrounded by people that felt just as lonely, overwhelmed and tired as I did. Rather than being at home with people that could support me but not relate to my upcoming journey, I was surrounded by people who knew exactly how I felt without having to say a thing.
Thus far orientation has been a true gift and a much needed space for reflection on what the summer has been like and what the future holds. It is so special to share this week with other young people that feel called and confused- the future is so unknown and intimidating. But the future is also long-awaited and promising. Together we have faith that God has called us to be here together and to go from this place with the support that family and friends, MCC staff, and our peers here at MCC are able to offer.
Once again I am reminded of how grateful I am that God knows me better than I know myself. I needed the rest that home offered, and orientation came just in time- even if it felt like it had arrived before it was welcomed. This place has turned out to offer a sacred time of reflection and renewal. I was sure I was making a mistake in coming here, but God knew what I needed all along. 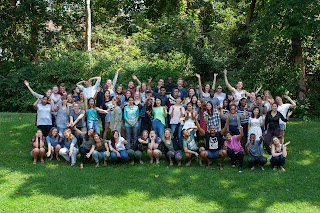 Posted by Katelyn Rediger at 1:25 PM No comments: